The Life of Jesus in the Bible

Learn what the Bible says about the life of Jesus.

Join us to look at the life of Jesus and what the Bible says about His life. Learn how His life matters in your life today.

We have all heard about God, and many have heard about Jesus. But who is Jesus? Is He only a man and a great prophet who did many good deeds and changed the world through His good teachings? Or is He something more? Is He, as many say, the “Son of God”?

No one can read the Gospels without feeling the actual presence of Jesus. His personality pulsates in every word. No myth is filled with such life. –Albert Einstein

What the Bible says about Jesus

In this article we will see what the Bible says about Jesus. Join us on our journey to discover God’s desire to become one with us by entering humanity as the man Jesus, then learn how Jesus died on the cross as the Lamb of God to forgive our sins to save us, and how Jesus can now live in us as the Spirit who gives life. 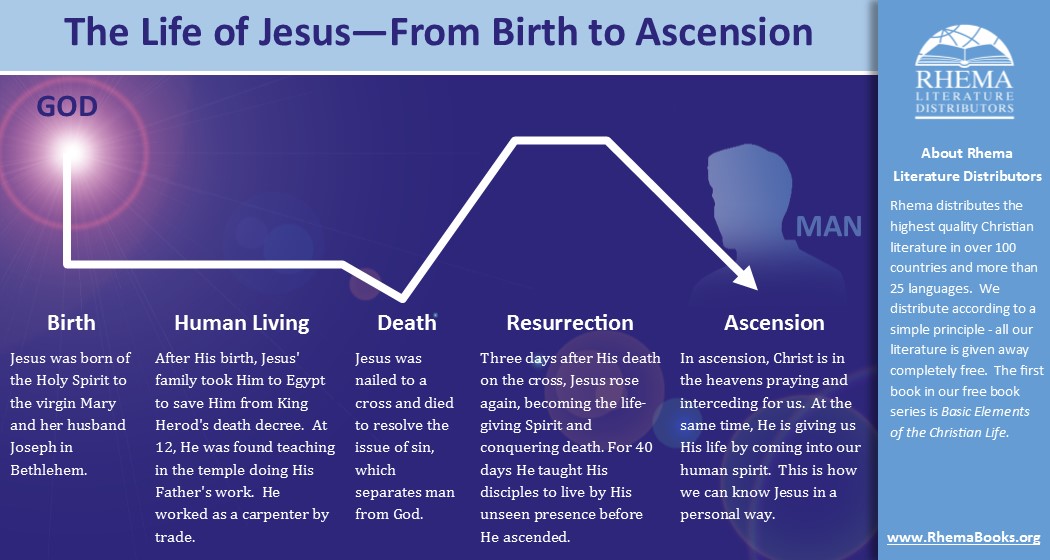 Over 2,000 years ago, the eternal God entered His creation by begetting Himself through His Spirit in the womb of a human virgin named Mary in Nazareth. Mary was married to a God-fearing man named Joseph, and gave birth to a genuine human infant named Jesus in the city of Bethlehem of Judea. They were visited by Gentile magi, or wise men, who brought gifts of gold, frankincense and myrrh to honor Jesus. From Bethlehem, Jesus and His family went to Egypt, and then returned to Israel, settling in a city called Nazareth.

Jesus grew, and at the age of 12 accompanied His parents to visit the temple in Jerusalem for the yearly Feast of the Passover. He remained behind at the temple, while His parents assumed that he was traveling with others in their group. After three days, Mary and Joseph found Jesus in the temple, listening to and questioning those around him. Mary rebuked Jesus, saying that they had been worried, while Jesus told her that he was tending to the things of His Father. Jesus returned with his parents to Nazareth, and advanced and grew in wisdom and stature.

Jesus lived a genuinely human, yet divine and sinless, life on the earth. Jesus’ cousin, John, proclaimed a baptism of repentance for forgiveness of sins. Many people were baptized. When Jesus was baptized, “the Holy Spirit descended in bodily form as a dove upon Him. And a voice came out of heaven: You are my Son the Beloved; in You I have found My delight” (Luke 3:22)*.

Jesus began to minister when he was about 30 years old. In His ministry in Galilee, he proclaimed the jubilee of grace, and taught, cast out demons, healed and preached. He healed a leper, a paralytic, a dying one, and a woman with a flow of blood, and he raised up from the dead a weeping widow’s only son and others. Jesus appointed 12 apostles to follow Him, learn from Him, and carry His message to the whole world after His resurrection. He taught all of His disciples to have the highest morality. He taught with parables, identified his real relatives as those who “hear the word of God and do it” (Luke 8:21), quelled a storm, cast out a legion of demons, sent His apostles to spread His ministry, fed a crowd of 5000 with five loaves and two fish, and unveiled His death and resurrection.

In Jesus’ ministry from Galilee to Jerusalem, He instructed people how to follow Him, appointed 70 disciples to spread His ministry, and portrayed Himself as the good Samaritan with the highest morality. Jesus taught about prayer, watchfulness, faithfulness, repentance, and following Him. Jesus also unveiled the saving love of the Triune God - the Father, the Son and the Spirit- toward sinners using parables of a shepherd seeking after a lost sheep, a woman seeking after a lost coin, and a father receiving a wayward son. Jesus also unveiled His death and resurrection again.

Jesus cast out those who were sullying the temple by selling in it and making it a “den of robbers,” taught in it, and passed all of the examinations of the chief priests, scribes, elders and different sects, including the Pharisees (the strictest religious sect of the Jews), Herodians (those who sided with King Herod’s regime to bring Grecian and Roman elements into Jewish culture), and the Sadducees (the ancient modernist sect of Judaism). Jesus prepared His disciples for His death.

Jesus was betrayed by one of his disciples, Judas, who sold Jesus’ location for 30 pieces of silver. Jesus was arrested by the chief priests and officers of the temple and brought to the house of the high priest. Jesus was blindfolded, mocked and beaten. Then He was brought before the highest Jewish court at the time, the Sanhedrin, who judged Him because He acknowledged that He was the Son of God. The Sanhedrin then brought Him before the Roman rulers, Pilate and Herod, who both found no fault with Him. However, because the multitude of people clamored for Him to be crucified, Pilate cravenly released Jesus to them to be crucified.

On the way to the place of the crucifixion, the people compelled a man named Simon to carry the cross behind Jesus. When they reached the place called The Skull, Jesus was crucified on the cross in between two criminals at about 9 a.m. For three hours, He suffered the persecution of men. But from noon until about 3 p.m. the land became dark, as God put the sins of mankind on Jesus and judged Him in our place. Jesus died as the Lamb of God to shed His blood to forgive us of our sins. A good, righteous and rich man named Joseph asked Pilate for Jesus’ body, which he wrapped in fine linen, laid in a new tomb, and sealed with a stone. Roman guards stood in front of the tomb.

Jesus is a God whom we can approach without pride and before whom we can humble ourselves without despair. –Blaise Pascal

Three days later, some of the women who had ministered to Jesus in Galilee visited the tomb. They found the stone rolled away, with two men in dazzling clothing standing by. The men, who were angels, said to them, “Why are you seeking the living One among the dead? He is not here but has been raised. Remember how He spoke to you while He was still in Galilee, saying that the Son of Man must be delivered into the hands of sinful men and be crucified and on the third day rise up” (Luke 24:5-7). The women told the apostles, who did not at first believe them. One of the apostles, Peter, rose up and ran to the tomb, and saw linen clothes folded alone, and he marveled at what had happened.

Then Jesus met two disciples walking on the way to Emmaus, about seven miles from Jerusalem. He conversed with them, but they did not recognize Him until He broke bread with them, and then He disappeared. The two disciples right away went to Jerusalem to tell the 11 apostles and those with them, when He appeared in their midst. They were frightened that He was a ghost, so He told them, “See My hands and My feet, that it is I Myself. Touch Me and see, for a spirit does not have flesh and bones as you behold Me having” (Luke 24:39). He also ate a piece of broiled fish handed to Him. During the next 40 days, Jesus was always present with them, but some times He was invisible to their eyes, and other times He was visible to their eyes. Then He commissioned the apostles and those with them. “And He led them out as far as Bethany, and he lifted up His hands and blessed them. And while he blessed them, he parted from them and was carried up into heaven” (Luke 24: 50-51).

Jesus is the Life-Giving Spirit

In His resurrection, Jesus became the Spirit who gives life to us by entering into our human spirit, the deepest part of our being. Since Christ is now the Spirit, we can receive the life of God into our spirit. This is what the Word of God calls being born again. To receive this life, we need to turn back to God and believe in the Lord Jesus Christ. You may do so now by praying this simple prayer:

“Lord Jesus, I believe all the Bible says about You! I believe you are the Son of God incarnated in the flesh to live with me. Lord Jesus, cleanse me of my sins, save me, and come into me as the Spirit! Lord Jesus, I love you!”