Why Does the Bible Refer to God as He?

No. 3 in the Series, Most Frequently Asked Questions About God

The Bible has been referring to God as “He” since the beginning when Moses wrote Genesis approximately 3,500 years ago. In the latter part of this century, some have begun to question whether God is male, female, or neuter. This has become so intense that recently some published a neuter Bible, modifying all passages referring to God as male. Before anyone modifies the Bible to neutralize the gender of God, one should understand why the Bible refers to God as “He.” After all, the Bible is inspired by God, and it would be inappropriate to make any modifications which would change His meaning.

Mankind was Created in God's Image

Mankind was originally created in the image of God; he was created to express God in His life and to love God (Genesis 1:26-27), (Deuteronomy 6:5). But man fell away from God through sin; therefore, today we do not see mankind the way mankind was intended to be. Instead of expressing the God of love and righteousness, mankind took in Satan and is expressing the devilish nature of hatred and unrighteousness (Titus 3:3), (Hebrews 2:15). Instead of loving God, mankind loves many other people, matters, and things in this world as replacements of God. (1 John 5:19), (Colossians 1:21), (Jeremiah 3:1), (2 Timothy 3:4).

God Is the Father 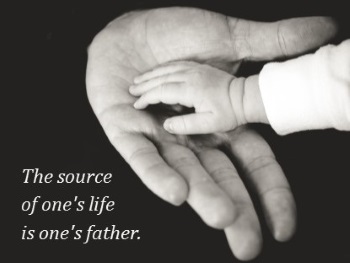 God is abundant in His life. He wants many sons to be His expression. In order for human beings to become His sons, they must receive God as life. (Ephesians 4:6). When they have Him as life, they are begotten of Him; He becomes their Father (Ephesians 3:14-15), (Galatians 3:26). In the Bible, the source of one's life is one's father, not mother. Therefore, the Bible refers to God as He.

In Genesis, the first book of the Bible, we are told that mankind was created both male and female. This fact displays something about God and His heart. After the man Adam was created, God said that it was not good for man to live alone and built a woman as his wife (Genesis 2:18), (Genesis 2:22). 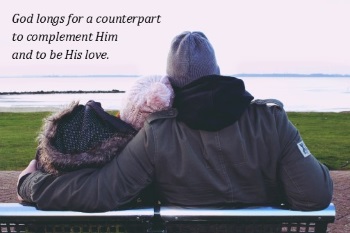 This indicates that God feels that He is alone and wants a wife. God is perfect in Himself, but not complete in the sense that He longs for a counterpart to complement Him and to be His love. In Revelation, the last book of the Bible, God has a universal corporate bride: the people who are redeemed by Him through His death, filled with Him as life, and built into a corporate woman (Revelation 21:2), (Revelation 22:17). In between the first and last books, the Bible develops this thought and reveals how God, through much labor, accomplishes this task.

God Is the Husband of Created Mankind

God considers all His people as a universal corporate woman (Ephesians 5:25-27). All created men symbolize the “real man”—God. All created women symbolize the real universal woman—God's wife. Isaiah 54:5 tells us that our Maker is our Husband. He is the “real man” of the universe. He is all that is desired of in a “real man.” He is almighty, loving, kind, and righteous. He does not get sick or die. He cares for the ones He created. He is a great provider. He made the heaven for the earth, and He made the earth for mankind with all that is necessary, such as air, water, food, material for clothing and housing (Matthew 5:45). He is a universal hero. He is always ready to save His created people (Ephesians 5:23). He has all the qualities men seek to have and women seek after in a man. What God wants is that His created mankind, as a corporate woman, would give all her love to Him alone.

God to Us Is a He in Life and in Love

In terms of the source of life, God is our Father and we are His sons. In terms of the relationship of love, God is our Husband and we are His wife. Humans may receive God as life to be His sons and at the same time believe into Christ to become part of His corporate beloved in the new creation. The Bible refers to the believers as the sons and wife of God. As God is the Father and Husband, the Bible refers to God as He. As God's sons, we are all male and no one is female. As God's beloved, we are all female and no one is male. There is no male or female in the new creation (Galatians 3:28). As sons, we express our Father. As His corporate wife, we love our Husband above everything and submit fully to Him. But in either case God to us is still a He.

The Dispute between Male and Female

In leaving God, mankind became devoid of God's life and the love for God, and therefore was not subject to God's authority but under Satan's control (Ephesians 4:18). The relationship between male and female has become spoiled. Fallen men, because of the sinful nature in them and their greater physical strength, have been mistreating women for centuries. Unfaithfulness, battery, slavery, robbery, physical violation, mental abuse, discrimination, and even murder, in most cases, were committed by men against women rather than by women against men. There has been a building up of resentment and animosity among females throughout the past six thousand years of human history. Therefore, within this century, there has been a struggle for equal rights and legislation against gender discrimination and for the protection of women.

The men should not be blamed entirely. Women, the symbols of God's corporate bride, did not submit to men just as the whole of mankind did not submit to God. The Bible says, “For a husband is head of the wife as also Christ is Head of the church, He Himself being the Savior of the Body. But as the church is subject to Christ, so also let wives be subject to their husbands in everything. Husbands, love your wives even as Christ also loved the church and gave Himself up for her.”

Neither the males nor the females are capable of absolute love and submission, respectively. The dispute between the sexes is growing, and the rift is greater than ever. That is why some people have changed the Bible to refer to God as neither male nor female to make this book "politically correct." There is no light at the end of this dark tunnel of dispute among mankind except one—turning back to God the Father and Husband (Ephesians 2:14).

Coming Home to God the Father and Husband 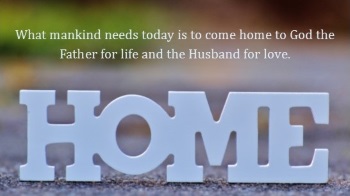 What mankind needs today is to come home to God the Father for life and the Husband for love. God is the real “He” of the universe. When we need life and authority to express God and stand against the devil, He is our true and life-giving Father. When we need love, protection, provision, and pleasure, He is our real and proper Husband. We the fallen “he's” and “she's” need “Him.” We the males and females need to be His strong sons and His lovely bride. Open up and pray to Him, “Lord God of heaven and earth, through the redeeming death and resurrection of Jesus Christ, I want to come back to You. Be my life-giving Father and my loving Husband.” When more and more people come back to God the Father and Husband, the animosity between God and mankind, and among mankind, will be dissolved, and the earth will be a lovely and peaceful place to live (Isaiah 2:4), (Revelations 21:4).